For Shannon Henderson, the words of poet Maya Angelou resonate strongly and deeply:

It is a quote that is much more than inspirational. For Shannon, it represents a daily philosophy.

“The quote is so important in our day-to-day life. I feel it is part of our job to ensure our residents feel valued and worthy,” she said

“The elderly population can often feel forgotten or without purpose. It is so important we make them feel special, needed and worthy in the latter stages of their lives,” she continued. “Caring for the residents is not always about what we do or say. Sometimes it’s just sitting with them in a comfortable silence that makes them feel better for that moment.”

Shannon’s worked at Bladen East Health and Rehabilitation for nine years—each one of those years representing 365 days of making someone’s world a better place.

A North Carolina native, she earned her nursing degree from James Sprunt Community College in 1993 and her NC licensure for Nursing Home Administrator in 2018. Prior to becoming the facility administrator, she was the Director of Nursing.

“I enjoy the daily interaction with our residents. It is a great feeling to know that you made a person’s life a little better just by going to work,” she said. “In this line of work, we have residents that have no family or family is not able to visit and our staff becomes like family to these residents. Being able to bring the residents joy and happiness in their daily life is my favorite part of my job.”

“I have always enjoyed working with the elderly population and have never regretted my career choice,” she said.

In 2002, she accepted a Director of Clinical Operations position which covered NC and VA skilled nursing facilities. She continued in this role until 2011. She accepted the Director of Nursing position here at Bladen East Health and Rehabilitation so that she could stop traveling and be available to her children as they finished high school.

She has two boys, ages 22 and 25. Her oldest son is an occupational therapy assistant who also works at Bladen East.

“They are the light of my life,” she said.

But for Shannon, a career in long-term care is about much more than positions and duties. It’s about the feeling of family that the staff and residents create at Bladen East.

“Caring for our residents involves so much more than actual “hands-on” care. At the end of the day, the most important thing is that we made their lives a little better,” she said.

We’re thankful to have Shannon as part of our wonderful, friendly staff at Bladen East.

A virtual tour is just a click away, where you can explore all that we have to offer. From a peaceful, yet stimulating, environment to a compassionate and friendly staff, see why we are the region’s community of choice. Contact us to learn more. 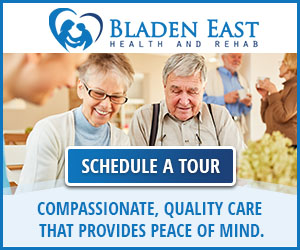